I mentioned in a previous post that I am trying to get ready for the pub quiz that will be part of the unofficial Jeopardy! reunion in Washington, D.C. in April, which itself is linked to the National History Bowl.  (I’m making a big presumption that is assuming I’m invited.)  While looking up something about a clue tonight, I found pubquizhelp.com.  It’s a British site, and I haven’t looked too much at it, but I definitely will.  I think it will help.
I also asked for help from members of the Jeopardy! message boards.  I didn’t get a huge response, but I did learn a thing or two: I didn’t know that pub quizzes are team events.  It was also suggested that I needn’t bother studying, in that case: It’s better to know something everyone else doesn’t than to know something everyone else does.  I’m taking that into consideration.  Furthermore, 5-time champ and 1992 Tournament of Champions finalist Jerome Vered responded with a link to obrienspubquiz.com.  Jerome was also a finalist in the 2005 Ultimate Tournament of Champions that also featured Brad Rutter and Ken Jennings.  And I just found out tonight, Jerome’s going to be in Washington, too!  Roger Craig has also confirmed.
Today’s contestants:﻿

﻿
Every contestant was active from the start, but Joe suffered from guesses (or so they seemed to be) throughout the Jeopardy round.  At the first break, he had -200 while Mike had 1800 and Meg had 1200.  Mike found the Daily Double in Book Numbers shortly after the first break.  He had 2600, Meg had 3000, and Joe still had -200.  Mike wagered 1000 on this clue: “This Dickens novel opens in the year 1775.”  I missed this one, but I’d like to point out that I didn’t truly read it (sorry, Mrs. Hofeditz).  It was the last book I had to read in high school, and I couldn’t muster the desire to do it.  Mike got it right.  At the end of the Jeopardy round, he had 3600, Joe had 400, and Meg had 3400.
Mike also found the first Daily Double in the Double Jeopardy round, in Sorry About That.  (This category immediately followed one called Multiply by 5, divide by 2, add 3.  Hence the name.  Yeah.)  Mike had 6400, Joe had rebounded and had 4400, and Meg had 3400.  Mike wagered 2000 on this clue: “In 1986, the French government apologized and paid compensation for the sinking of this group’s ship The Rainbow Warrior.”  I knew this one, but Mike did not.
I was disappointed to have missed this clue in Abbrev., because I just saw a clue about it on Who Wants to Be a Millionaire last week: “A police cruiser’s right front bumper nudges a fleeing suspect’s left rear, to induce a stop using the PIT maneuver; PIT short for ‘this intervention technique.'” 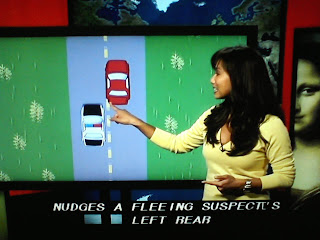