Good news: I’ve discovered another Jeopardy!-related blog!  It’s called Image Relay.  It is not solely about Jeopardy!, but the author, Nicholas Condon, is going to appear on the show on June 13th, and he says on the blog he “will discuss [his] recent ideas about mathematical modelling of Jeopardy! performance.”  This blog is brand-new, with only four posts so far and its first one on March 2nd.  It looks good so far and I wanted to pass it on to you in case you will benefit from it.  Let me know in a comment what you think!
It always seems like I’m unable to blog on nights that something big has happened on Jeopardy!  On Wednesday, it was the rare occasion that two contestants were in the red going into Final Jeopardy, leaving just one contestant to play it.  My friend Robert tells me it hasn’t happened in a regular season game since 1987.  No wonder I didn’t remember it ever happening!
Today’s contestants and even Mr. Trebek all seemed to be dressed as though they were going to a funeral.  I’m kinda surprised Mr. Trebek didn’t mention it himself.  I have to wonder if that’s how Tom’s opponents felt soon into his fourth episode.  He had won $92,001 going into today’s episode.  The guy has been a bulldog and a bulldozer, and he seems to run away with each game before his opponents know what hit ’em. 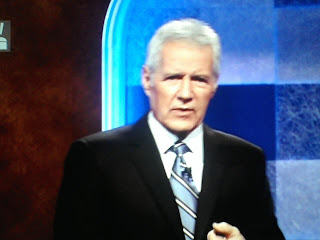 Mr. Trebek mentioned earlier this week that Tom seems to find all the Daily Doubles.  He did today, too.  The first one was in 1911.  By then he had 4000, while Christine had 200 and Duncan had -600.  Tom, wisely but not surprisingly, wagered everything on this clue: “Forgotten for centuries, this royal retreat of Incan kings was rediscovered by Hiram Bingham in July.”  Tom seemed to be smiling as this clue was being read, and indeed he got it right.
Mr. Trebek gave the one-minute warning with a whopping 8 clues left!!  Luckily, we got through 6 of them, but I wish we could have seen the last clue in Classic Movie Trailers.  Anyway, when the round ended (you might want to hang on to your hat), Tom had 9800 while Christine had 1000 and Duncan had 800.  Duncan mentioned in his interview that he is at a disadvantage because he is not holding a beer like he usually is when he watches the show.  Somehow, I don’t think that’s it.
Tom’s next Daily Double was in Battles.  He had 15800, Christine had 1800, and Duncan had 1200.  (No, that’s not a mistake, this time! ;-))  I half-expected Tom to wager 10000, but he wagered 5000 on this clue: “Crecy in 1346 is believed to be the first European battle where this substance was used; business was booming.”  Tom got it right.
His next Daily Double was in Shakespeare, for Starters.  He had 29200 while Christine had 3800 and Duncan had 2800.  (How does Tom do it?)  Tom wagered 9000 on this clue: “Philo’s first speech in this play includes the line ‘The triple pillar of the world transformed into a strumpet’s fool.'”  Tom actually missed this one!
Finally (for Christine and Duncan but not the rest of us!), the final.  Tom had 22600, Christine had 9000, and Duncan had 6400.  The category was The Presidency, and this was the clue: “With a combined age of just 90 years, this president and vice president were the youngest team ever inaugurated.”  I got this one right, as did Christine and Duncan.  Mr. Trebek said he couldn’t imagine that Tom got this wrong, and I thought so too but wouldn’t have said so!  Tom did get it wrong, though.  He had a lock (more like a stranglehold) on the game, of course, so we’ll see him Monday.
My Coryat score today was 17800.  Tom‘s was 24600, Christine’s was 9000, and Duncan’s was 6400.  Two things are bothering me, though (besides not getting the highest Coryat score): I answered “TNT” for “gunpowder” and “kielbasa” for “knockwurst.”  I assume those can’t be accepted, but I’d love to hearing your comments on it!  My best categories were Bad Fortune Cookies, “K” as in…, Me and Ms. Jones, and Classic Games.  My worst were Which Direction Are You Headed? and Battles.
Coryat scores for Wednesday and Thursday:
3-16: Peter Perigo -1400     Rebecca Rogers -3600     Tom Kunzen 25600     Me 18800 (This is the first time I’ve ever seen negative final Coryat scores.)
3-17: Tom Kunzen 27000     Zack Azzam 13800     Mary Linnenbringer 2600     Me 24400