This is currently a placeholder post which will be updated with Final Jeopardy! information and a game recap once it is known. Is this not the one of today’s game that you’re looking for? You can find the recap for today’s syndicated game here, and the recap for semifinal #1 here.

Andy’s Pregame Thoughts: Lauren and Stephen were both dominant in their respective quarterfinal, but both missed a pair of Daily Doubles. Isaac, on the other hand, went 2-for-2. Lauren was the strongest on the signalling device in the opening round. If she can keep that up, she’s got the best chance of winning tonight. (Though, Stephen has more of an upside if he figures out the timing; he was only 50% in the quarters.) As I said in the semifinal #1 recap, though, viewers need to be aware that only the top 3 winning scores advance to the final. This means that normal wagering strategy is thrown out the window. I still hope that a contestant doesn’t go unnecessarily viral because of viewers’ misunderstanding of the rules. You can find more about the potential Final Jeopardy! strategies tonight in my semifinal preview.

A 1525 textbook on anatomy says this, being “so different of colours”, could also be called “rain bowys”

Correct response: What is the iris? 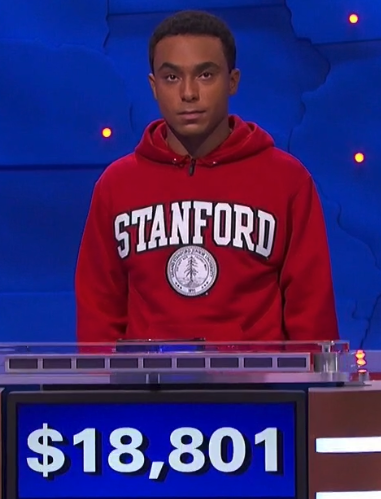 Today’s interviews:
Stephen is on the rowing team at LSU and got to be a movie extra.
Isaac works in chem labs where he researches machine learning methods to develop vaccines.
Lauren had a grandfather that also studied sociology at Ponoma.