Warning: This page contains spoilers for the December 8, 2022, game of Jeopardy! — please do not scroll down if you wish to avoid being spoiled. Please note that the game airs as early as noon Eastern in some U.S. television markets.

A cocktail, an island & a WWII venture originally called “Development of Substitute Materials” all bear this name

Yesterday, the post-Cris Pannullo era began with a barnstormer of a game; two players were both over $20,000 going into Final! Unfortunately, a Triple Stumper meant that Ron Cheung only finished with $19,599, but victory is just as important, as it means being able to come back the next day! Today, he faces A.Z. Madonna and Sriram Krishnan.

“Manhattan is an island” is a fact that the Jeopardy! writers like to throw out from time to time; today is no exception. The three parts of the clue refer to the cocktail (which, according to legend, was created for Winston Churchill’s mother at the Manhattan Club), the island itself in New York, and the World War II Manhattan Project (named as such because there were concerns that “Development of Substitute Materials” would attract too much attention; thus, the project was named after Col. James C. Marshall’s offices in Manhattan in New York.)

I like “Name’s the Same” clues, especially in Final, as they can often turn into a small puzzle, and the “a-ha!” moment is very satisfying when solved.

(Categories: The World Of Patent Models; Rhyme Time; “U” In History; A Night At The Opera; Monkey Business; Mark’s Brothers & Sisters)

A.Z. got off to a slow start, but found the Daily Double and pulled herself out of the hole by the opening break. Ron held the lead after 30 clues, buoyed by doing better on the signaling device.

(Categories: Let’s Get Down To Cases; What A Novel Character!; In The Room; Countries From Wordplay Categories; Preparing For The Role; 1990s Vocab Test)

Final Jeopardy! today was a triple stumper—for the third day running, we have a new champion! Sriram returns tomorrow to defend.

Looking to find out who won Jeopardy! today? Here’s the Thursday, December 8, 2022 Jeopardy! by the numbers: 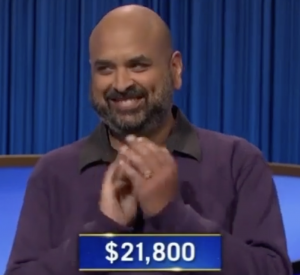 A.Z. is a classical music writer, unusually for her age.
Sriram skipped second grade.
Ron lives in a house that came from Sears in 1928.