Thanks to all who attended our Jeopardy! viewing party last night. I have to brag about those who dropped by:
Ben Ingram (and girlfriend Liz!)
Alan Koolik
Josh Frumkin
Lee Ann Roberts
Enos Williams
Brandon Saunders
Joe Taglic
Sarah McNitt
Nikki Airi
dhkendall from jboard
Jeff Xie
I’m honored. And here are pictures of Andy and me. 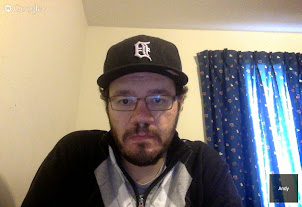 I couldn’t sleep today, so excited and nervous was I about the Hangout. I shut down my Chromebook at the end, thinking I was too tired to blog on today’s episode. But I’m fired up by the positive response! Thoughts for future Hangouts: Changing the time so more people can join us. Giving it a definite ending time. I personally want to make more use of the text chat for the quieter types. 🙂 And Andy and I definitely want to make the Hangout available to view live on the blog. That was the intention but Andy and I realized a little ahead we couldn’t do it this time, and we know what I should’ve done differently. Other suggestions? I want to make you happy!
On to today’s episode!

The contestants must’ve read “The Scarlet Letter” – They started with You Wish You’d Read The Scarlet Letter. Hey, I did in high school! Alan found the Daily Double of the round there after getting the first 2 right in the category.
Cooper 0
Alan 600
Jeff 0
Alan wagered 1000 on this clue: “This Christian group is called ‘the most intolerant brood that ever lived.'” Alan and I got it right, and I expect you did too!
I knew this one in State’s Lefts thanks to a recent trip: “To the left of Maine.”
At the first break:
Cooper 1000 (2 right)
Alan 3800 (3 right)
Jeff 4000 (6 right)
I swept Sweet Charity.
The contestants seemed to dislike Journalism as much as they liked Scarlet Letter – They went to it last! I was only 1/5 in the category myself, with one neg! And my first bachelor’s degree is in Communications!
Cooper 2400 (3 right and one wrong)
Alan 5800 (4 right)
Jeff 7400 (5 right)
I was 0/5 in Exploration, with one neg! Jeff found a Daily Double there.
Cooper 2400
Alan 5800
Jeff 10200 (3 right)
He wagered 2000 on this clue: “In 1892, 17 years before his North Pole fame, Robert Peary proved this was an island, not part of a continent.” Not surprisingly since he’d already gotten 3 right in the category, Jeff was right! Also, Jeff had just said in his interview that he participated in geography bees. Hey, why didn’t Jeff wager more?
Alan found the next Daily Double, in Before He Was President.
Cooper 7600 (4 right)
Alan 10600 (4 right)
Jeff 10600 (One right and one wrong)
Alan wagered 3000 on this clue: “He was Thomas Jefferson’s Secretary of State.” Alan knew this right away.
Who would’ve thought I’d get a triple-stumper in Before He Was President, and at 2000: “He served as Tennessee’s first U.S. representative.”
Since Mr. Trebek accepted Jeff’s “limes” on this one in Medical History and said any citrus fruit was acceptable, I counted my “grapefruit”: “Around 1747 British navy doctor James Lind discovered that eating these could prevent scurvy.”
At the end of the round:
Cooper 5600 (One wrong)
Alan 19200 (4 right)
Jeff 17000 (9 right and 2 wrong)
The Final Jeopardy category was Bestselling Books. This was the clue: “This novel is dedicated to Esther Earl, who died of thyroid cancer at 16 & never got to read it.” I’ve never read the book or seen the movie, but I once titled a post with almost the same thing, because it was in the last Teen Tournament too. I do believe that’s the only way I knew this, and instantly. One of our Hangout guests highly recommended this book! I thought more contestants would get this, but only Alan did. Cooper lost 5400. Jeff lost just 2000. Alan was right and added 5800! He’s sittin’ pretty for tomorrow.
My Coryat today was a disappointing 24400, with 2200 in negs. I can’t be bothered to figure out what my Coryat needs to be tomorrow so that my average is higher than in the last Teen Tournament, but we’ll find out soon if it will be enough.

One year ago: This indecision’s bugging me
Two years ago: My Yearly Humbling Begins
Three years ago: Meet Me in September
Four years ago: Girls rule, the categories drool (sometimes)