One of the liberties listed in this: “No man shall be forced to perform more service for a knight’s ‘fee’…than is due from it”

Correct response: What is the Magna Carta?

The Magna Carta was signed in 1215 between a group of English barons and King John; John had been ruling England essentially by “force and will”, often taking arbitrary decisions. Angry at the constant increase in taxes that King John was fund unsuccessful wars in France, the barons began organizing resistance against the King, and the Magna Carta was the set of demands from the barons which became their peace agreement with King John. It is still seen today as the foundation of much of the common law system used in England and many former British colonies. The agreement was revised many times over the next few decades, with the 1297 version remaining in force today. The clause from today’s clue is from Clause 16 of the Magna Carta.

The full text is available from the British Library. 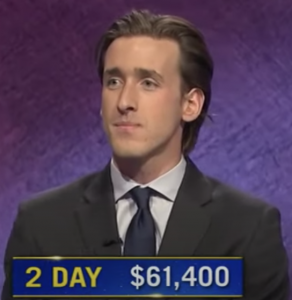 Unplayed clues:
J! Round: None!
DJ! Round: None!
Total Left On Board: $0
Number of clues left unrevealed this season: 115 (2.21 per episode average), 2 Daily Doubles