Warning: This page contains spoilers for the September 13, 2022 game of Jeopardy! — please do not scroll down if you wish to avoid being spoiled. Please note that the game airs as early as noon Eastern in some U.S. television markets.

In yesterday’s game, Luigi de Guzman completely dominated the proceedings, seemingly ringing in at will and picking up over $40,000. That said, viewers should be reminded of the old proverb—one swallow does not make a summer. One great game does not automatically make a super-champ—though I think that a lot of people are curious to see if Luigi can repeat yesterday’s very strong performance. (Though, I’m sure, back in early August when this episode was taped, that April and Justin would prefer that it not repeat.)

Correct response: Who is Prince Albert?

Prince Albert has been the only Prince Consort in British History, having been given that title after marrying Queen Victoria in 1840. He held that title until his death in 1861; Albert’s death devastated Victoria and she wore black for the remainder of her life and reign.

The Jeopardy! Round belonged to Justin today! Despite having a response overturned on review, he picked up $8,200 and held a lead over Luigi after 30 clues!

April was in a distant third place until midway through Double Jeopardy, when she made this into a very tight 3-way game by picking up $5,000 on a Daily Double! Luigi pulled back into the lead when he got the final Daily Double in the closing stages, but he also didn’t bet enough—April got the final $1600 clue of the round to hold a very slim lead going into Final!

Both Luigi and April got Final correct—April looked very sullen after Luigi’s response and bet were revealed, and that was because she knew she hadn’t bet enough! Luigi wins his third game and is now at $97,200! He’ll go for win #4 tomorrow!

Looking to find out who won Jeopardy! today? Here’s the Tuesday, September 13, 2022 Jeopardy! by the numbers: 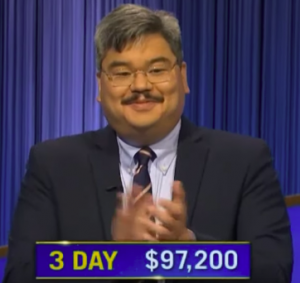