Warning: This page contains spoilers for the November 10, 2022, game of Jeopardy! — please do not scroll down if you wish to avoid being spoiled. Please note that the game airs as early as noon Eastern in some U.S. television markets.

By ferry, the distance between these 2 paired Mediterranean islands is about 40 miles from Alcudia to Ciutadella

Yesterday, Amy Schneider played her way into the finals. Today, Matt Amodio makes his return to the Jeopardy! stage. His opponents today are John Focht and Sam Buttrey, both of whom put up incredibly impressive quarterfinal performances. Both John and Sam looked very ready for the Tournament of champions. My prediction model still thinks Matt is the favorite, and his buzzer timing seems good—he got in first most often during the exhibition match on Tuesday. However, both John and Sam proved in the quarter-finals that they can pull off a victory in today’s game. Things could get very interesting!

Also, if the J!6 categories are any indication, I had a great chuckle at the third category in Double Jeopardy. This definitely feels like a callback to the 2013 Tournament of Champions, where Keith Whitener ran a semifinal category called DRUMMER FOR THE BAND en route to victory, much to top seed Jason Keller’s chagrin, who was very vocal online afterward in his disdain for the category, referring to the category as “Rock Drummers”.

Correct response: What are Majorca and Menorca (Minorca)?

Here’s what I really like about this clue in a Tournament of Champions context: in regular play, one would see “2 paired Mediterranean islands” and “about 40 miles”, immediately go to Corsica and Sardinia, and be done. If you did that here, you’d be wrong. Of course, Majorca and Menorca are also two paired islands, part of the Balearic Islands (which are a part of Spain). That’s certainly been a theme of this tournament, though—the writers seem to be trying to catch players who are relying too much on the “regular play” canon, almost saying, “your Pavlovs will not work here!” (For the uninitiated, I use the term the same way Bob Harris used it in his Prisoner of Trebekistan.)

One other thing I found interesting: While Google Maps does not believe that there is a ferry between the two locations, a ferry definitely exists and can be booked. (Which is good, because it takes less than two hours direct; according to Google, it would take nearly eight.

This was a very close game for the entire round—by the end of it, Sam had a very tiny lead over Matt.

Statistics at the first break (16 clues):

(Categories: The Lore Of The Land; Scientific Trios; The Rock Bassist’S Group; We Spy; With Our Little “I”; Something That Is…)

Matt seemed nervous at the start of Double Jeopardy, but he did double up on the opening clue with the Daily Double! He needed to find the last one, though, and he didn’t—Sam did and picked up $6,000 to jump into a huge lead! Sam carried that lead through to Final Jeopardy. Going into the Final, the scores were Sam at $23,000, Matt at $16,800, and John at $12,600.

All three players got Final correct today — which means, in a monumental upset, Sam Buttrey is now a finalist!

Looking to find out who won Jeopardy! today? Here’s the Thursday, November 10, 2022 Jeopardy! by the numbers: 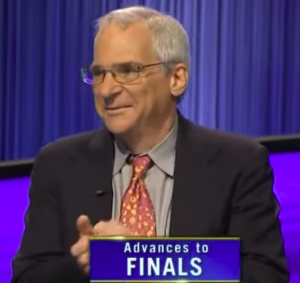 Sam went viral because he looks like Steve Martin.
John was interviewed by an MLB show after his wins.
Matt fixed his air conditioner and hired an accountant after his wins.