Warning: This page contains spoilers for the January 18, 2023, game of Jeopardy! — please do not scroll down if you wish to avoid being spoiled. Please note that the game airs as early as noon Eastern in some U.S. television markets.

In 1692 Increase Mather wrote, “It were better that ten suspected” these “escape, than that one innocent person … be condemned”

It’s always nice when I get to write this: A Canadian is the defending champion on Jeopardy! Last night, Vince Bacani picked up $13,000 with his victory in last night’s game! Today’s challengers are Naperville, Illinois teacher Erin Portman and Avon, Connecticut real estate analyst Alec Wang.

Correct response: What are witches?

Increase Mather’s words regarding the Salem Witch Trials, in Cases of Conscience Concerning Witchcrafts, were a rebuke of the fact that the special Court of Oyer and Terminer, created specifically to hear these cases, was relying heavily on spectral evidence as proof of witchcraft. Mather’s words were finally strong enough for the colony’s Governor, Sir William Phips, to end the trials. (Though it must be said, it was pretty much entirely due to Mather’s lobbying of the Crown that Phips was named Governor of the Massachusetts colony in the first place.)

Erin definitely had the best Jeopardy! round, punctuated by a true Daily Double, in amongst 9 correct after the break! She was nearly in five figures, with Vince and Alec far behind.

Vince got to both Daily Doubles—his first one saw him fall back to $0, but he got the second one, and clawed back Erin’s runaway by going for an almost True Daily Double! Scores going into Final were Erin at $21,000, Vince at $15,599, and Alec out of play at minus $2,000.

Both Erin and Vince got Final today; Erin is your new champion! She’ll attempt to get win #2 tomorrow!

Looking to find out who won Jeopardy! today? Here’s the Wednesday, January 18, 2023 Jeopardy! by the numbers: 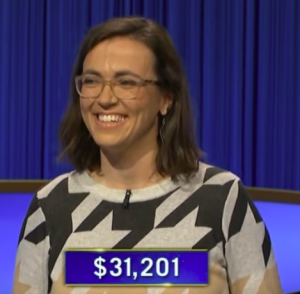 Alec: (By rule, did not participate in Final Jeopardy!)