A character who was going to be called Lunar Larry became him, inspired by the name of a real person

Andy’s Pregame Thoughts: Ultimately, you win a game of Jeopardy! by having more money at the end of the game than your opponents do. Katie has done this three times. Katie has also very aptly demonstrated that Jeopardy! has strategic considerations that are more than “respond correctly to clues” and is an utterly deserving 3-day champion. She did a much better job yesterday at limiting her incorrect responses; doing that again will increase her chances of winning an all-important fourth game!

Today’s Clue of the Day for the Alexa sweepstakes: DEAR DIARY: After releasing his autobiography “Long Walk to Freedom”, this South African leader shared diary entries in “Conversations with Myself”

Clue of the Day correct response: Who is Nelson Mandela?

Correct response: Who is Buzz Lightyear?

Buzz Lightyear, one of the main characters of the Toy Story series of films, was originally going to be named Lunar Larry, but was renamed Buzz Lightyear after famed astronaut Buzz Aldrin.

Disney and Pixar posted some of the concept art to Facebook last year.

Here’s hoping that Katie’s streak keeps on going “to infinity and beyond!” 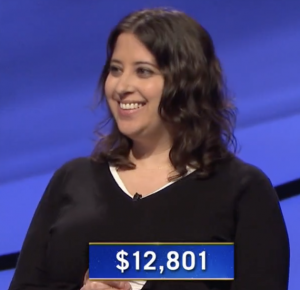 Unplayed clues:
J! Round: None!
DJ! Round: None!
Total Left On Board: $0
Number of clues left unrevealed this season: 192 (1.02 per episode average), 2 Daily Doubles