Andy’s Pregame Thoughts: Andrew He has cemented his place in the next Tournament of Champions, picking up his 5th win in yesterday’s game. Since the beginning of Sky’s the Limit in 2003, 106 people have won 5 games (Andrew being the 106th). 5-time champions are 55-50 going for win #6. Will Andrew become the 56th superchampion today, picking up win #6?

There’s been some confusion as of late surrounding the term “superchampion”. The term was originally coined back in 2003 on the official Jeopardy! message boards at the official Jeopardy! website (that was a thing that existed back in the 2000s) when Sky’s the Limit was first introduced, in order to differentiate the new 6-time champions from the previous time-limited 5-time champions. As a matter of editorial policy, The Jeopardy! Fan has deliberately chosen to continue the original usage of this term.

Yes, Manhattan is an island; it is bounded by the Hudson River, Harlem River, East River, and New York Harbor. The northern part of the Harlem River, Spuyten Duyvil Creek (that forms the northern part of Manhattan’s border), was the key part of a famous Final Jeopardy! that the show asked during the Ultimate Tournament of Champions back in 2005 and was the start of Grace Veach’s unlikely run to the Round of 18 in that tournament. 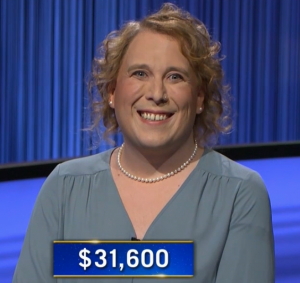 Today’s interviews:
Amy has a podcast about “Downton Abbey”.
Max was a test subject for acupuncture students in college.
Andrew has perfect pitch.