Warning: This page contains spoilers for the November 21, 2022, game of Jeopardy! — please do not scroll down if you wish to avoid being spoiled. Please note that the game airs as early as noon Eastern in some U.S. television markets.

The January 12, 1864 Washington Evening Star reported on a performance of this “dashing comedy” to “a full and delighted house”

After Friday’s game, I was worried that Amy was going to be knocked off her game by her Final Jeopardy! wager in Game 5—for what it’s worth, the show broke for lunch between Game 5 & 6. However, now that she has specifically said on Twitter, “I knew there was an outcome where that wager cost me the entire tournament, and I’d resolved that even if that happened, I wouldn’t let it haunt me”, I think that Amy will come out with the same resolve in Game 6 that she came out with in Games 4 and 5. The way this tournament has gone and how everyone has played, I just get the sense that Amy is going to be in the driver’s seat, and I feel like the situation is going to break in her direction at some point in the last two games, and that things will work out for her to take the tournament down.

Correct response: What is Our American Cousin?

FORD’S THEATER.—Tom Taylor’s dashing comedy, entitled “Our American Cousin”, will be performed tonight again at Ford’s. Mr. John T. Raymond will appear as “Asa Trenchard”, and he will be ably supported by Mr. Ford’s line stock company. This play was performed last night, and to a full and delighted house, and there is no doubt it will be equally attractive tonight. Tomorrow night Mrs. D. P. Bowers appears. Such was the report from Page 3 of the Washington Evening Star of Tuesday, January 12, 1864. The most famous performance of the play in American history took place at Ford’s Theater on April 14, 1865; it was during that performance where Abraham Lincoln was assassinated in the Presidential booth at the theater.

All three players got off to a good start; Sam found the Daily Double; unfortunately, he could not get it correct and fell back to $0. Amy and Andrew ended up with 10 correct responses in the round, but Amy held a tiny lead after 30 clues.

(Categories: Bodies Of Water; Films By Tagline; Let’s Do The Math; “P.J.”S; Hegel; With Cream Cheese)

Double Jeopardy! saw Sam find both Daily Doubles and get them both correct to take the lead. Unfortunately, Sam took three crucial incorrect responses on the way to the finish line to leave him in third place. Meanwhile, a tight battle between Amy and Andrew was only cemented on the 28th clue of the round, with Amy holding a very slim lead going into Final. Scores going into Final were Amy at $15,600, Andrew at $14,200, and Sam at $8,000.

Andrew and Amy both got Final correct—there was some suspense as we waited to see if Amy made the cover bet today—and she did! Amy Schneider has won the 30th of Champions.

Looking to find out who won Jeopardy! today? Here’s the Monday, November 21, 2022 Jeopardy! by the numbers: 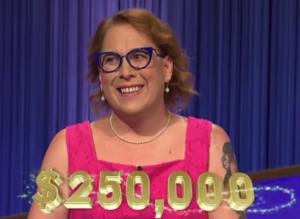