Warning: This page contains spoilers for the January 25, 2023, game of Jeopardy! — please do not scroll down if you wish to avoid being spoiled. Please note that the game airs as early as noon Eastern in some U.S. television markets.

Yesterday, Troy Meyer became only the 7th player in the “Sky’s The Limit” era to win their first four games in runaway fashion. None of the previous six picked up a runaway in game number 5. Today, he faces off against Kristina Zimmerman and David Maes.

Correct response: What is a kremlin?

While the most famous Kremlin is located in Moscow (and is often referred to in the Western world as “The Kremlin” in reference to the Russian—or in the past, Soviet—government), the general term for a major historic Russian fortified complex is “kremlin”. A number of them—including the Moscow Kremlin and the Novgorod Kremlin—are UNESCO World Heritage Sites. Nizhny Novgorod’s kremlin dates to the early 16th century, while Pskov’s was constructed in the late 15th.

(Categories: Garden Variety Stories; 3-Letter Responses; How Do I Get There?; Pacino Played ‘Em; You Wear Me Out; We Grade That H-Plus)

Troy got off to the best start, picking up 10 correct and $9,000 before the interviews. Coming out of the break, Troy did well, but Kristina and David were picking up on the signalling device.

(Categories: Book Of The Year; Classical Is In; The SNL Alumnus Who…; How Many Dotted Letters?; Good Luck; We’Re All Counting On You)

Double Jeopardy! saw Troy only get in 8 times on the signalling device! This game David an opening; he doubled through the first Daily Double. Kristina found the last one, but went conservative, and her incorrect response put her into third going into clue #61. Troy had a narrow lead going into Final at $18,400. David had $16,400 and Kristina had $9,200.

Final Jeopardy! today was a triple-get; Troy is now a 5-day champion! He goes for win #6 tomorrow.

Looking to find out who won Jeopardy! today? Here’s the Wednesday, January 25, 2023 Jeopardy! by the numbers: 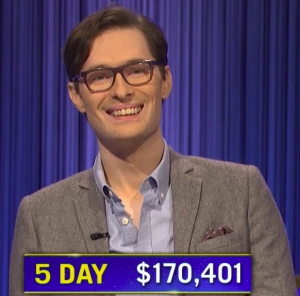 David played against Obama’s softball team in Chicago.
Kristina has a Swiss passport.
Troy had a basketball thrown to him by Lebron.

Kristina: You have exactly one good bet today: $5,200. This will cover against David’s smallest cover bet, while staying $1 ahead of Troy if he covers David and misses. Anything else significantly reduces your chances of winning. (Actual bet: $0)