Warning: This page contains spoilers for the January 24, 2023, game of Jeopardy! — please do not scroll down if you wish to avoid being spoiled. Please note that the game airs as early as noon Eastern in some U.S. television markets.

Today on Jeopardy!, Linda Napikoski and Joe Incollingo do battle against Troy Meyer, who has had three runaways in three wins thus far. That has put Troy at the top of the list of this season’s 3-game winners; today’s game, though, is absolutely crucial for his potential Tournament of Champions chances.

I’m going to use my platform today to talk a little bit about some of the things that Yogesh Raut has been in the news for saying as of late. Yogesh has certainly been the recipient of a much-more-than-normal amount of harassment and negativity over the past two weeks, and a non-zero amount of that has been because of the color of his skin. How many of Yogesh’s statements would be ignored, glossed over, or even defended more vigorously if he was white? And the tabloid media circus that has surrounded the show over the past eighteen months has only served to amplify things, to the point where this certainly would have already died down had this occurred in the past.

However, I also don’t believe that Yogesh is completely blameless in this situation. Stories have come out from a couple of places over the last few days regarding Yogesh’s behavior at pub quizzes; Yogesh himself has referred to having been banned by venues. To this, I would like to say: the largest pre-pandemic pub quiz group in the U.S. is called “Geeks Who Drink”. It is not called “Geeks Who Drink Water And Don’t Tip”. Before building The Jeopardy! Fan from a homespun side project for a couple of fans to a single person running what has essentially turned into a daily show recap and news website, I spent eight years where my chief source of income was as a pub quiz host. I can honestly say that players who showed up, ordered water, and didn’t tip the wait staff are the number one reason why I am no longer a pub quiz host. It causes immense stress on both a venue and a host if you show up to a pub quiz and don’t actually support the venue, and it is behavior that should result in being shunned, regardless of who does it.

Still: if this was a certain “Am I The…” subreddit I would definitely be leaving an “Everybody Sucks Here” comment. A lot of fans (not everybody, but a lot) have acted very poorly, and Yogesh’s past actions leading up to this haven’t exactly been pristine, either. (Unfortunately, I also don’t really see anyone in the situation actually changing much about their actions.)

In any case, onwards and upwards—and it would not surprise me if Jeopardy! set its next Tournament of Champions field in order to portray Yogesh as a heel for most viewers to cheer against.

Correct response: Who is Vladimir Nabokov?

Regarding cluing: this is the second time this month that Jeopardy! has used the category “Foreign-Born Authors”. In both cases now (Isabel Allende and Vladimir Nabokov), you have an author who was born in another country (thereby inviting a pinning controversy had Jeopardy! used the term “American”) but did a significant amount of writing while in the United States (also inviting a pinning controversy had Jeopardy! used “World Literature”). I don’t know what else Jeopardy! can do here, if they even should do anything. It’s clear, though, that the category title is a massive hint in the direction of “someone who was born outside of the United States, but did a significant amount of their writing in the United States”.

(Categories: Dante’s Circles Of Hell, Defined; What Season Is It?; Say It With Advertising; They’re Bad In Books; 3.7 Trillion Fish In The Ocean; Finding Nimoy)

Troy’s general dominance continued today, with him picking up 17 correct and the Daily Double; his score was over five figures after 30 clues.

Linda had the best time in Double Jeopardy of the two challengers, as she nearly doubled up on the game’s final Daily Double. Unfortunately for her, Troy picked up another 17 correct in the round, including the game’s middle Daily Double, to have a commanding runaway going into Final. Scores going into Final were Troy at $32,800, Linda at $10,300, and Joe at $7,400.

Final today was a triple get—Troy got a crucial win #4; he goes for win #5 tomorrow!

Looking to find out who won Jeopardy! today? Here’s the Tuesday, January 24, 2023 Jeopardy! by the numbers: 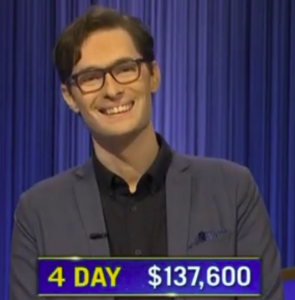 Linda wants to visit the best bookstore in all 50 states.
Joe went as a Batman villain for Hallowe’en in college.
Troy was married in the same church in Ireland that his partner’s grandparents were married in.