Andy’s Pregame Thoughts: As has routinely become the case for Jeopardy! on or after a holiday, the website wasn’t updated properly for the new week. (I’m guessing that the show will be back to normal by some time tomorrow. I will say, it is particularly annoying as a fan, as it causes confusion every time on the part of the viewership. That being said, two challengers will be up against 5-day champion Courtney Shah.

Correct response: What are (the Gulfs of) Tonkin and Thailand?

“Indochina”, the mainland continental portion of Southeast Asia, is comprised mainly of Thailand, Cambodia, Laos, Myanmar, and Vietnam. To the southwest lies the Gulf of Thailand; to the northeast, on the Vietnamese coast, lies the Gulf of Tonkin. The latter is probably best known to Americans for the 1964 Gulf of Tonkin incident (and later Resolution), which led to significantly increased American involvement in the Vietnam War. I’m guessing that for this reason, this clue will probably play easier for the home viewer than the contestants in-studio, as the home viewer is probably much more acquainted with the Gulf of Tonkin. 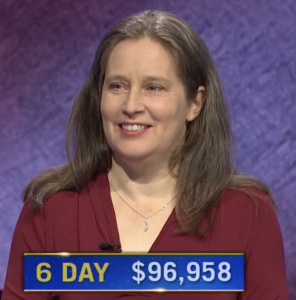 Unplayed clues:
J! Round: None!
DJ! Round: None!
Total Left On Board: $0
Number of clues left unrevealed this season: 198 (0.99 per episode average), 2 Daily Doubles