Befitting the title, Antoine Galland, the first Western translator of this collection, worked on it only “after dinner”

Correct response: What is The Thousand and One Nights?

Antoine Galland, trained as a classical scholar, translated many Arabic manuscripts into French; the Thousand and One Nights was actually a nighttime diversion from the academic world. Much as the Grimm brothers collected their fairy tales, the Arab literati collected these stories, and it was from these manuscripts that Galland translated (and created) the work best known to Western audiences today. Additionally, a couple of stories in the work—most notably Aladdin and Ali Baba—were not part of the manuscripts; these stories came from noted Syrian storyteller Hanna Diyab.

Today’s opening segment belonged mostly to Mattea, with the defending champion picking up 9 of the 15 clues (including the Daily Double). Sarah picking up a pair of $1,000 clues helped her score, though! After the break, things were very even, and Sarah’s better performance in the bottom rows of the board led to her having a small lead after Single Jeopardy!

Double Jeopardy! Round categories: West of the Mississippi; Geology; Art on Commission; Airlines; Actors on Broadway; One E, Double E

Mattea went conservative on both Daily Doubles, which didn’t give her enough to cement a runaway; as Sarah picked up the final $2,000 clue to also bring Caitlin back into contention in Final. Your scores going into Final were Mattea at $20,800, Sarah at $12,400, and Caitlin at $9,800.

Today’s Final saw Caitlin with the only correct response—however, her not betting enough means that Mattea won her 10th game! Mattea will return tomorrow. Ken’s comments of “You escaped” towards Mattea were certainly apt!

Looking to find out who won Jeopardy! today? Here’s the Monday, April 18, 2022 Jeopardy! by the numbers: 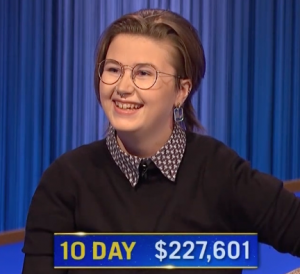 Unplayed clues:
J! Round: None!
DJ! Round: None!
Total Left On Board: $0
Number of clues left unrevealed this season: 64 (0.41 per episode average), 0 Daily Doubles

Today’s interviews:
Sarah has kept a journal of every book she’s read since 1996.
Caitlin had a piano bench explode on her mid-concert.
Mattea was a member of her middle school’s bridge team.

Mattea: Standard cover bet is $4,001. I’d recommend staying there, as there’s always a chance that second or third will underbet.

Caitlin: Your only chance of winning is on a single-get Final. You absolutely need to get up to $16,800, so your minimum bet needs to be $7,000. You might as well bet everything to maximize winnings in case that happens.

Sarah: Your cover bet over Caitlin is $7,201, which is enough to get ahead of Caitlin. However, because Caitlin’s minimum bet should bring her to $2,800 if she’s wrong, you’re probably safe to bet up to $9,600.