The brightest star of this constellation is Deneb Algedi, or “Kid’s Tail”

Matt Mierswa has been playing very well over his first two games, picking up over $50,000 and dominating yesterday’s Double Jeopardy! round. However, his one weak point thus far—if you can really call it that—has been that he is just 2-for-5 on the Daily Doubles over his first two games. That might provide an opening for an opponent to take him down. Emmie and Stan certainly would be happy if they were the beneficiary of that today!

Correct response: What is Capricornus?

Capricornus, from the Latin for “horned goat,” is well-known today as one of the constellations of the Zodiac; “Deneb” is the Arabic word for “tail,” and “kid” is a reference to the fact that children of goats are known as “kids.”

Will Capricorn on its own be accepted? As this write-up was written before I’ve seen the show, I can’t say with 100% certainty either way.

Today’s opening round belonged very much to Matt, but his struggles on the Daily Doubles continued. He picked up 17 correct—his lone incorrect response was the Daily Double. Emmie was very strong at the bottom of the board, keeping her in contention after the opening round.

Matt did get a Daily Double correct in Double Jeopardy, but he was in a tough spot and only bet the clue value of $2,000. Emmie, her score buoyed by four different $2,000 correct responses, managed to keep things very close and kept Matt from having a runaway going into Final. Scores going into Final were Matt at $23,400, Emmie at $15,800, and Stan at $5,600.

Emmie—whose interview subject was about how she inherited a telescope from her grandfather and is a huge astronomy fan—was correct with a response of just Capricorn (Which, for the record, is perfectly good with me. It would have been incredibly ticky-tack for the judges to have ruled that incorrect.) That means she’s Jeopardy! champion and will get to return tomorrow!

Looking to find out who won Jeopardy! today? Here’s the Thursday, July 21, 2022 Jeopardy! by the numbers: 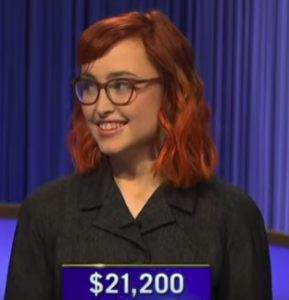 Stan found himself in Germany the day the Berlin Wall came down.
Emmie inherited a telescope from her grandfather.
Matt is wearing his grandfather’s non-working watch.

Looking to find out who won Jeopardy! today? Today’s results will be posted once the show airs! Due to changes in air times in some markets, this will take place later than in previous seasons.